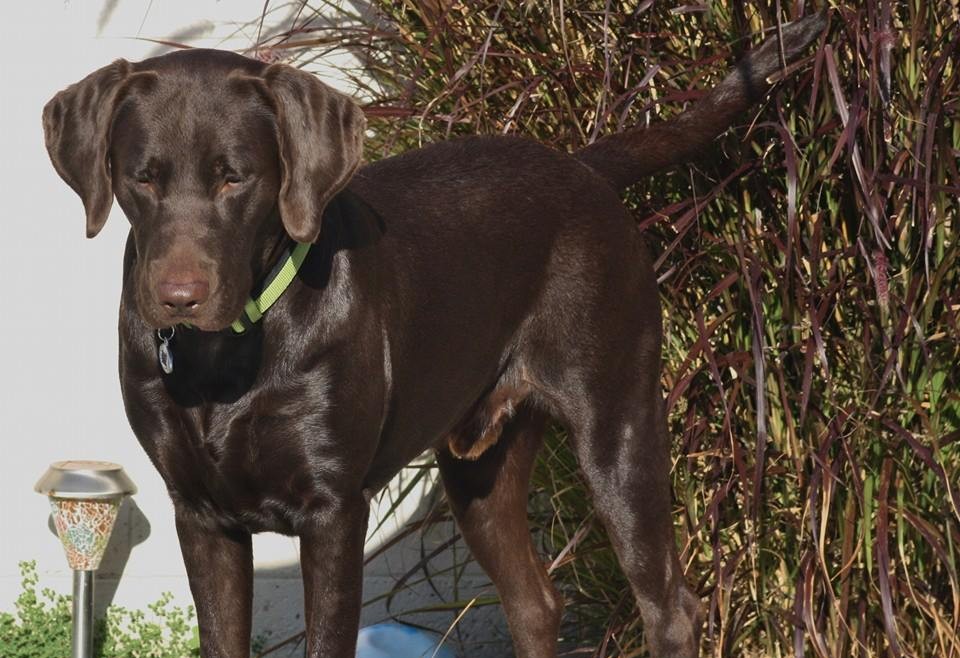 A syndrome of exercise intolerance and exercise induced collapse (EIC) is being observed with increasing frequency in young adult Labrador retrievers. It has also been observed in Chesapeake Bay retrievers and curly-coated retrievers. Affected dogs have been found in field-trial, hunt test, conformation, pet, and service lines. Black, yellow, and chocolate Labradors of both sexes are affected, with the distribution of colors and sexes closely reflecting the typical distribution in the population. Signs first become apparent in young dogs, usually between 5 months and 3 years of age (averaging 14 months). In dogs used for field trials, this usually coincides with the age at which they enter heavy training. Littermates and other related dogs are commonly affected, but depending on their temperament and lifestyle, they may or may not manifest signs. Affected dogs exhibiting signs of collapse are usually described as being extremely fit, muscular, prime athletic specimens of their breed with an excitable temperament and lots of drive. Video of a dog with it click here.

Affected dogs can tolerate mild to moderate exercise, but 5 to 20 minutes of strenuous exercise with extreme excitement induces weakness and then collapse. Severely affected dogs may collapse whenever they are exercised to this extent; other dogs only exhibit collapse sporadically. The factors important in inducing an episode can vary among dogs. The first thing noted is usually a rocking or forced gait. The rear limbs then become weak and unable to support weight. Many affected dogs continue to run while dragging their back legs. Some of the dogs appear to be incoordinated, especially in the rear limbs, with a wide-based, long, loose stride rather than the short, stiff strides typically associated with muscle weakness. In some dogs, the rear limb collapse progresses to forelimb weakness and occasionally to a total inability to move. Some dogs appear to have a loss of balance and may fall over, particularly as they recover from complete collapse. Most collapsed dogs are totally conscious and alert, still trying to run and retrieve, but affected dogs can appear stunned or disoriented during the episode. It is common for the signs to worsen for three to five minutes even after exercise has been terminated. Most dogs recover quickly and are normal within 5 to 25 minutes with no residual weakness or stiffness. Dogs are not in pain during the collapse or after recovery. Affected dogs are not stiff or sore or limping upon recovery.

Note: A few affected dogs have died during exercise or while resting immediately after an episode of EIC, so an affected dog’s exercise should always be stopped at the first hint of in-coordination or wobbliness. Video of a dog with it click here

Factors contributing to collapse in dogs with EIC

he ambient temperature does not seem to be a critical factor contributing to collapse, but if the temperature is much warmer or the humidity is much higher than the dog is accustomed to, collapse may be more likely. Affected dogs are less likely to collapse while swimming than when being exercised on land. There are severely affected dogs, however, who have exhibited collapse while breaking ice retrieving waterfowl in frigid temperatures, and some dogs have drowned when experiencing EIC-related collapse in the water.

Dogs that exhibit signs of EIC are most likely to have intense, excitable personalities, and it is very apparent that their level of excitement plays a role in inducing the collapse. There are some severely affected dogs who require very little exercise to induce the collapse. Dogs with EIC are most likely to collapse when engaging in activities that they find very exciting or stressful. This can include retrieving of live birds, participation in field trials, training drills with electric collar pressure, and quartering for upland game.

Routine exercise like jogging, hiking, swimming, most waterfowl hunting, and even agility or fly ball training may not induce an episode in dogs with EIC. Activities with continuous, intense exercise, particularly if accompanied by a high level of excitement or anxiety, most commonly cause collapse. Activities commonly implicated include grouse or pheasant hunting, repetitive “happy retrieves,” retrieving drills or repetition of diffi cult marks or blinds where the dog is being repeatedly corrected or is anticipating electric collar correction, and running alongside an ATV.

How to have your dog tested

The Veterinary Diagnostic Laboratory can test a blood, semen, dew claw, or cheek swab sample from your dog. They will be able to provide you with a result of clear, carrier, or affected for your dog. Results can be submitted to the Orthopedic Foundation for Animals (OFA) for publication in their open database.

For more information – For additional information, including testing instructions and FAQs, please visit their Web site

The inheritance of EIC

EIC is an autosomal recessive syndrome. To be affected, a dog must have received the mutated version of the EIC gene from both parents.

Comments: Fee is per dog; VDL testing fees are priced as low as possible and already at volume discount, due to the number of samples run in the lab at one time. No further volume discount is possible. Please note that we cannot update the result report with registration information if a tattoo or microchip was not verified at the time of testing.
See the EIC home page for more information.
Disclosure of financial interests: This test was developed through financial support from the AKC Canine Health Foundation. To date, proceeds from EIC testing at the University of Minnesota have returned more than $100,000 to the AKC Canine Health Foundation to further its mission to improve the health of all dogs. Drs. Mickelson, Patterson, and Taylor, and Ms. Minor are the patent owners of this genetic test, a portion of the proceeds go toward patent royalties.

Implications of the EIC Mutation for Breeding

One way to present the probability that puppies with EIC will be produced from the mating of parents of each of the three possible genotypes is shown above. Each parent, depending on its genotype, will contribute either the E or the N form of the EIC gene to a puppy. This in turn will result in that particular puppy’s own genotype of N/N, E/N, or E/E. Each of the four squares shown for each of the six possible matings in the Figure represents a 25% chance for producing a pup with that genotype. Thus, the matings resulting in one, two or four red squares will on average produce litters containing 25%, 50% and 100% EIC affected pups, respectively.

For example, breeding an E/N sire to an N/N dam can only produce puppies that are E/N or N/N, and according to our current data that supports a recessive mode of inheritance, none would be susceptible to EIC (2 black pup squares and 2 yellow pup squares). On the other hand, breeding an E/N sire to an E/E dam gives a 50% chance that a puppy will have EIC, since puppies can be either E/N or E/E (2 yellow pup squares and 2 chocolate pup squares). All puppies from the mating of two E/E parents will be E/E and thus likely be susceptible to EIC (four chocolate pup squares).

Mating an E/E parent to a clear N/N parent would not produce affected puppies (four Yellow pup squares), but all would be carriers. Lastly, and very importantly, we do not recommend selecting dogs for breeding based solely on their both being N/N for the DNM1 gene. Such a drastic strategy, although more quickly eliminating the possibility of producing E/E genotypes and EIC affected dogs, also has the undesired result of losing many of the outstanding exercise and performance traits expected of many lines of Labrador Retrievers. A better approach would enable the continued use of some of the many excellent E/N and E/E dogs by mating them to N/N dogs. This would produce litters without EIC and a choice of dogs to progressively decrease the frequency of the E form of the DNM1 gene by future matings to N/N dogs.

University of Minnesota. For EIC information go to the EIC Testing web site. 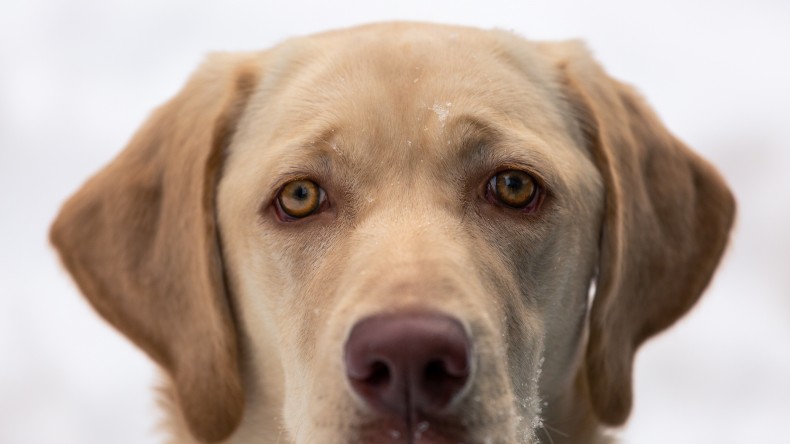 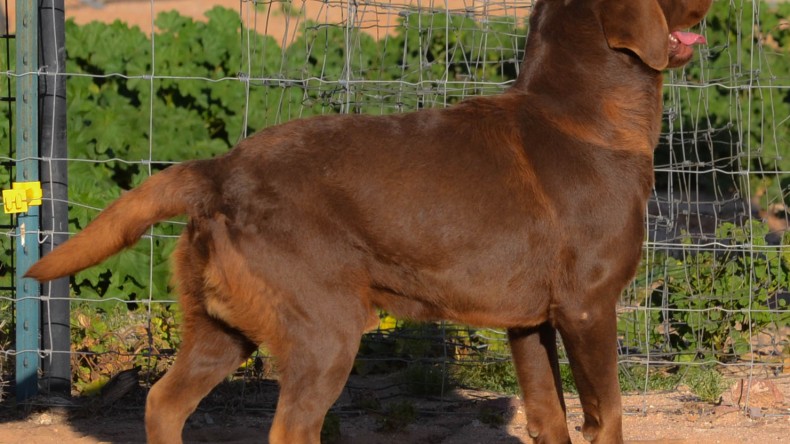 Starting Your Puppy Off Right!